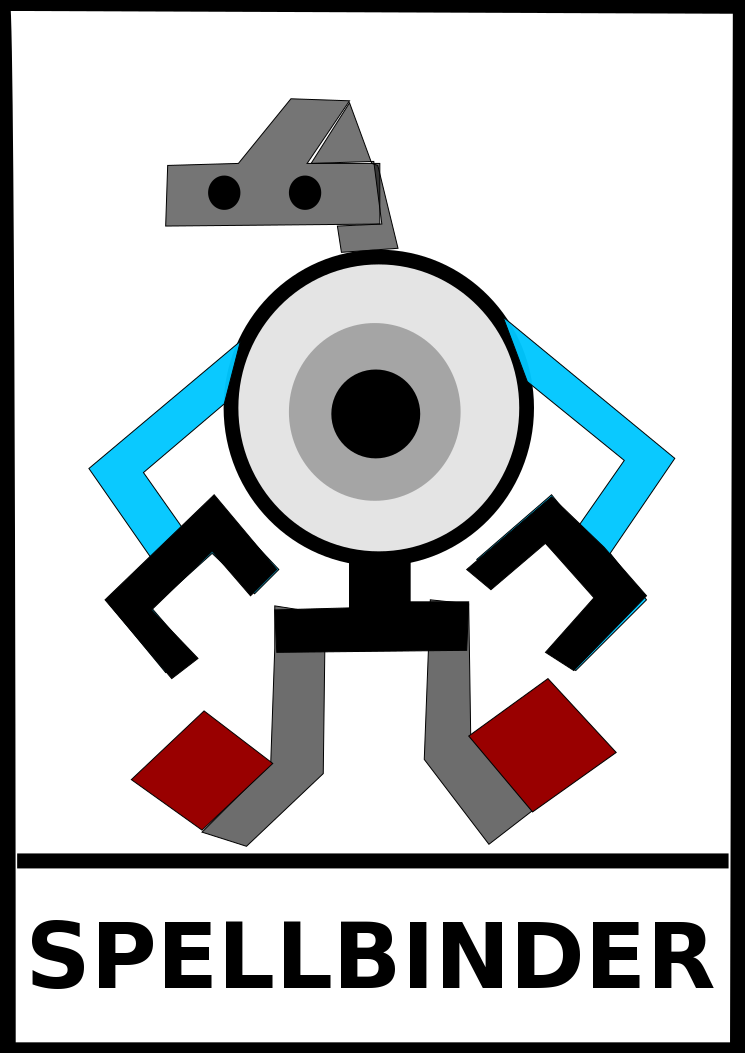 Another lovely character interview, this time from Spellbinder, member of the Trinity and the One and only known robot to be able to use magic. Set after the second book, Harmonic Waves, but before the third, Threads that Bind the Tempest.

Interviewer: So! The Trinity and the One has started off great with dealing with that little incident with Sargon.

Spellbinder: It has, has it not? That was certainly a feat we pulled off. Although the matter is still being dealt with on the side of the Grim Reaper and Sargon, we have assisted in retaining Empirian honor and face.

Something important. The Empire thanks you, Spellbinder, and the rest of the Trinity and the One.

The Empire should especially thank Cyclone, he was the primary agent in dealing with Sargon. Yet-

He needs no thanks, the glory is all he needs. How is it working with him? He is even more famous now than he was before.

It is...interesting. We are growing to understand each other. It is an honor to be in the presence of such a pious and devoted Empirian. His skill set is also quite interesting.

The Spine has him listed as the leader of the Trinity and the One--how are is leadership abilities?

Developing. I have...disagreements with some of his actions, but so far he is not led us particularly astray.

It sounds like there is some internal trouble between you four.

Not trouble, per say, but we are...getting used to each other. We have not known each other for that long at all--a mere blink in an Empirian's existence. This will change, to be sure, with the billions of years we will come to experience with each other in our divine duty as the Trinity incarnate.

The Trinity and the One.

Aye, Trinity and the One. Trinity incarnate with the robot Farrco.

Some have remarked that it the presence of robots is strange in the Trinity and the One.

Aye, it is strange, even to myself. I am very cognizant of how peculiar this all is. A mere robot being a part of such a legendary group incarnate? Insane.

Yet you are no mere robot! Spellbinder, you are the only known robot who can use magic.

My abilities with magic are...

Unique and a revelation to the Empire.

To be sure... My powers are unique, but they are not nearly as good as those who are presumed to have the ability, such as the Magaya. Their abilities are truly of note. Magic done by those that have a whole Kharat.

It is conjectured that you have a partial Kharat, but you are not a Mechanicha.

I agree with that conjecture, as do others who know me well. As for the Mechanicha, because of my...station, I cannot 'ascend' to being a Mechanicha, as I am already more than a mere robot without a Kharat. I am something...else. The Mechanicha have offered to grant me a sort of honorary position, but I do not think that is right to call myself something I am not.

So for now you are content to calling yourself a robot, even with the mild...derogatory tone that comes with?

It is currently the best term that describes me.

I understand. Is there anything you would like to say before we conclude?

The Empire should not have to worry. We shall become the heroes we are destined to be.

There was the character interview with the fascinating and unique Spellbinder! I hope you enjoyed it.

📁 Media
🏷 interview 🏷 spellbinder
« One Year Anniversary of How to Stop Wildfire! Contradictions in the Process are Opportunities for Advancement »