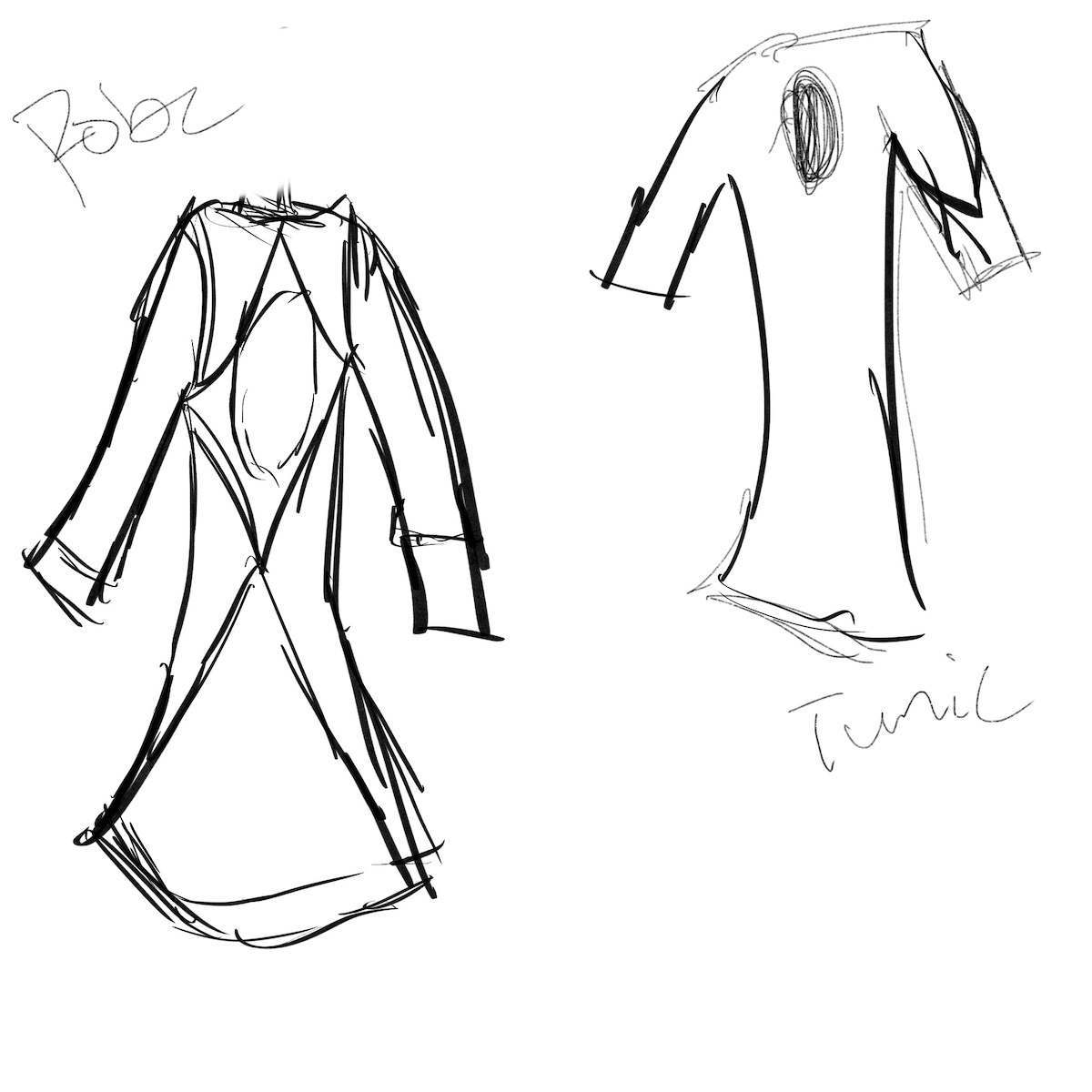 Not everyone in the Empire wears clothes, but for those that do, there are some common themes in fashion. So here I’m going to go through random clothing categories that are prevalent in the Empire and give my current thoughts on them. I’m not going to be going at it race by race, just general impressions on each clothing category.

So, anyway, we’re going to start with the big one.

Growing up with fantasy RPGs, robes were a conceptual staple. Robes were just…the style for mages or other non-melee fighters. They just seemed so cool and apt to me.

But I only really saw them in video games or in stylized art. Plus a few movie series (Harry Potter, Lord of the Rings), but I don’t really perceive those robes as the same as the robes I was thinking of. What the ones I imagined actually looked like, in reality, well, I honestly don’t think I ever really thought about it. So the idea of a robe, and the impression of it, stuck more with me than any particular real world or realistic example. So I think the reality of a robe doesn’t 100% gel with the implication of what they are in my world.

To me, robes are a fluid, comprehensive clothing option. They can be highly decorative, but also quite utilitarian.

But robes, despite being fluid, are well fitting in the torso areas. The legs/arms are where they are truly free and flexible, but they are tight against the chest and thus neck area, which is more pleasing to me. I don’t see them as being very layered.

Beyond structure, robes are also notable for their stunning patterns and design. Nothing says this better than Rayacha Chajaran’s iconic robe:

There’s different structures and drapes of robes, for sure, but the general ‘feel’ of them remains constant. Given the type of body structure they require, not many races can really pull them off, but for those that can (Magaya especially), it’s a staple.

To me, tunics are basically a long shirt that can cover the crotch area and go down to the thighs. They can be tighter or loose than robes and have short sleeves or no sleeves.

They also have the potential for having intricate designs, such as Ha’szja’s tunic:

Draped upon her delicate frame was a teal tunic with orange circles arranged in a geometric pattern. It was in an order he perceived as pleasing.

My drawing of Pakharan has her in a tunic, with a simpler pattern.

I think tunics are my go to for chest/arm covering for most bipedal races who aren’t wearing robes, since it’s such a simple article that can fit many such races. It’s basically a modified shirt that can eliminate the need for pants. But it can also just be shirt like. Like Paewar’s tunic/shirt and Balon’s top. Varying structure/style, but it all fits the same ‘goal’.

Dresses are a bit unique to me from tunics in that they are sort of the fusion of a robe and a long tunic:

Lana’s dress is the best example of this:

But, admittedly, what I call tunics could also be seen as dresses, and vice versa, so there’s some gray area here. I’d say dresses are a sub category of tunics, and the lines are blurred between them. Malechak, shown further below, is wearing what I’d call a tunic, but it is pretty dress-like, besides the lack of sleeves.

There are some outfits that are hard to classify. Something sort of both shirt and dress like. Blouses would probably be the best term for them. Councilor Sheziera’s outfit comes to mind, which I imagine as a sort of pseudo-kimono, and also Khapiela Quahwu’s garb.

Each race has different foot structure, so soft footwear varies widely and is not that common. I’d say hardier boots, like armored varieties, are more mainstream. Boots, or calf covers, would be more widely used than something that covers the entire foot top to bottom. But some beings of certain races do wear them.

Pants can be a separate clothing attire, like what Paewar Zfnoc (and Balon) wears:

With either form of pants, there’s another variation set: the bottoms being flared or tight to the leg.

I’d say there aren’t that many races that would really be able to or want to wear pants as we know them.

In this category are tight fitting one piece articles. Like jumpsuits or something that doesn’t go all the way to the ends of one’s limbs. These are pretty common, since they are great for fighting and agility.

Jewelry, scarves, etc. are all used and available. Not much to say here. Accessories are pretty common.

And, of course, to King and Cyclone.

The conclusion of all this is that in a diverse society, with lots of different body types, there’s going to be a lot of variation but also areas where there’s going to be elements of fashion that most races can engage with, if they want to. There’s anatomical overlap and in that overlap are the most frequently used articles. But there’s also choices that will be incredibly popular to a certain type of body/fighting style too.

But, regardless, an Empirian can have an extremely individual/unique tailored look if they want. But they can also have customized version of options that are rather common in the Empire or to their race. The possibilities are both endless and bounded.

The last time I did a Hogwarts house sorting for characters was in 2016 and I alluded to doing more…and I never did. But now I am! I was thinking about Spellbinder’s Ravenclaw aspects while writing her character development spotlight and realized that this was very much overdue.